Greetings and welcome in to this edition of Zero528!

Regarding the rock band Boston, Tom Scholz,’ and the ROCKMAN guitar amplifier’s positive affect on me and my life…the definition noted above says it all.

Boston Memories – How it all began

My brother Dave and I endured a seemingly never ending bus ride from southern Iowa to Iowa City to visit family during spring break. I can’t recall how, but we got the news that Boston would be in concert at the Iowa (Hawkeye) Field House while we were in town. Choice! 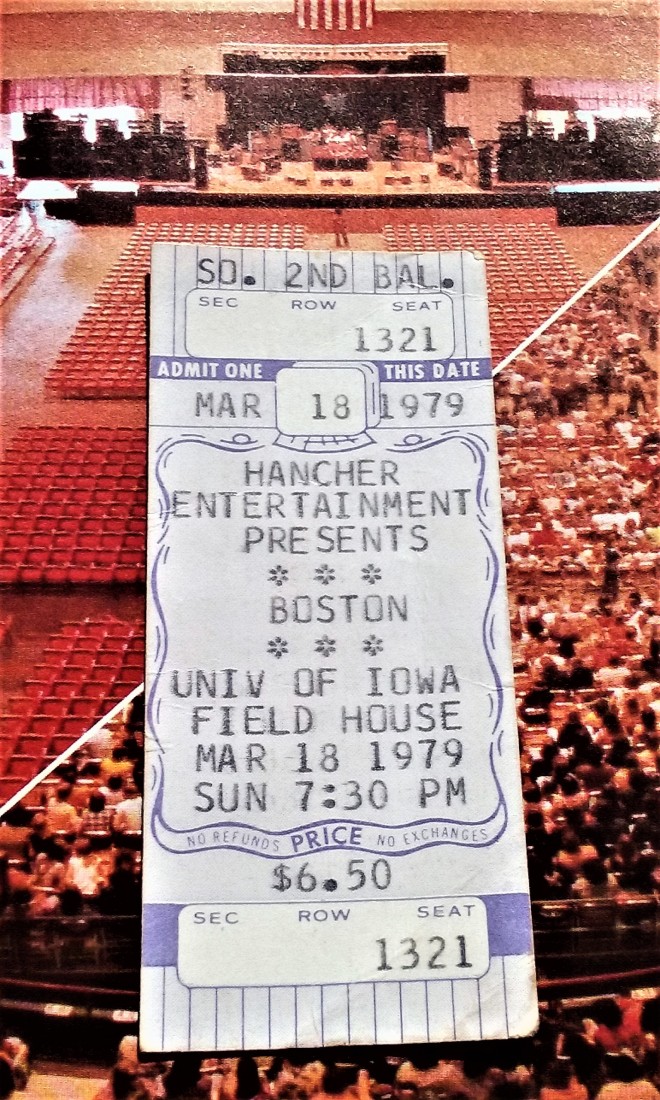 I had never been to a concert, let alone a rock & roll concert with an estimated 10,000+ people in attendance. I had heard Boston songs on the radio of course, and my siblings owned and played Boston records (and 8 tracks) . . . anyway, my life has never been the same.

Witnessing Boston live with the original line up was a simply amazing experience – Tom, Brad, Barry, Fran, and Sib. The 1979 tour was in support of their second release, Don’t Look Back (my favorite Boston song). I’ve since had the pleasure of meeting and visiting with Brad Delp and Barry Goudreau, corresponding with former Boston drummer Doug Huffman, and thoroughly enjoying four additional Boston concerts over the course of many years – each one a real treat!

While Dave, our friend Doug Fox, and I were standing in line to get our tickets, some guy tried to pick-pocket me. I was wearing bib overalls, so I immediately stuffed my wallet into the front chest pocket so as to avoid any other attempts to steal it. We didn’t have a chaperone – didn’t even know we needed one, and so another fella in line behind us was quick to state that the three of us “were with him”…whew!

Upon receiving our tickets we noticed everyone else scrambling up the stairs to the general admission seats – so, we followed suit- realizing very quickly our ticket seat numbers didn’t mean a thing. Cheap Trick was the opening act – if my memory serves me correctly. I remember vividly the music was quite loud – so much so that we temporarily lost most of our hearing for nearly three days. Of course we thought that was neat.

The highlight of the evening for me was of course Tom Scholz conducting his mastermind wizardry on the guitar and keyboard/Hammond B3 organ (cloaked in a cape – like a vampire during one segment). These images became etched in my memory, but it wasn’t until modern day YouTube videos was I able to truly relive those fantastic moments.

A little research of my own

On into my teenage years, I was a Boston fanatic. I learned to play the drums but realized it was hard to write a song (and melody) on the drums. So, I also learned to play guitar and owned a Gibson Les Paul and ROCKMAN x100 (described below).

I purchased Boston posters and any other Boston paraphernalia I could find to adorn my bedroom. Converse Chuck Taylor’s even made it onto my feet. I had glued gold glitter onto them to resemble the image plastered on the inside album cover of Don’t Look Back. The better part of those years was spent desperately searching/investigating information about Boston’s highly anticipated third album.

What had happened to the band? Why was it taking so seemingly long for them to release another album?

The internet hadn’t yet come into being, so I delved into the periodical section of my high school library. Instead of doing my homework, I spent my time looking up Scholz or Boston in the appendix. I peeked into every guitar magazine I could find at the local book store seeking clues about the band’s status. I was desperate. Desperate to discover the status of the band because I had heard the “sound of music” changing before my very ears – becoming “pop.” I needed Boston – to protect rock & roll from dying.

The Arrival… awaiting the next “Boston”

But, it wasn’t just me who was curious about the status of the band – as I recall reading, even recording industry A & R executive’s comments eluded to seeking/finding the “next” Boston – of which many bands with a similar line up  – two guitars, lead singer, bass player, and drummer – came out of the woodwork like termites. Multiple bands popped up by the baker’s dozen including Def Leppard, Bon Jovi, Ratt, the Scorpions, Whitesnake, Poison, etc . . . in my opinion, to fill a huge hole that had been vacated by Boston.

In 1982 – Scholz Research and Development (SR&D) released their answer to Sony’s Walkman – except it wasn’t a radio/cassette player, it was a miniature guitar amplifier the size of a “peanut butter sandwich.” Through the mini headphones or plugged into another speaker source, this series of amplifiers known affectionately as the ROCKMAN, enabled guitarists to achieve similar guitar tones found on Boston recordings including various distortion levels which were previously only attainable at high volume levels. Along with the distortion tones, which were noted in a review as being “church-friendly,” others could  be individually dialed-in to achieve a host of sounds from clean to edge and chorus effects.

NOTE: Prior to SR&D’s line of modules (Power Soak, ROCKMAN, etc.), guitarists had to set their amplifier volumes on high/10 to achieve sought after distortion levels – not an ear-friendly situation.

The answers I finally discovered, as for the delay of the third album (Third Stage), were simple and quite complex at the same time. One, Tom Scholz is a perfectionist and makes albums slowly . . . very slowly and two, during his attempts to produce Third Stage he, his band-mates, and their management company were being sued by CBS/Sony/Epic Records for not fulfilling the contract to have produced a third album – this according to CBS’ timetable. SR&D also became Scholz’ platform which to generate revenue in defense of the CBS lawsuit against him.

After a long battle, Scholz was finally able to provide sufficient evidence in US District Court which indicated that no matter how slowly he was working on the highly anticipated third Boston album . . . he was working on the album. Therefore, it became apparent that CBS was in fact guilty of “breaking the recording contract” when, in their attempts to force Scholz to produce the third album, illegally withheld royalty payments to Scholz which had been and were being earned and generated from the sales of Boston’s first two albums.

Finally, Third Stage was released in 1986 on MCA Records. The album instantly shot to #1 on the Billboard charts and produced a #1 hit, Amanda. I raced to Texas Tapes and Records to purchase my copy of the album…the unmistakable sound of Boston was solidified in my mind upon hearing the riff and G-string double bend embedded in the song “Cool the Engines.” Whoa! Boston was BACK.

Scholz’ contributions to music (better music through science), musicians, and the music industry business can be best described as colossal. Did he do it alone? No! Although an amazing and talented musician, writer, producer, and engineer – in my opinion – many other talented musicians influenced him and many individuals helped him achieve his vision of Boston.

NOTE: Tom if you happen to be reading this, it’s on my bucket list to meet you. How about I treat you to one of my vegan fruit smoothies?

Credit where credit is due:

Additional images of Scholz © as noted

Boston and Scholz images where NOT noted © 2017 Ron Pownall

Greetings and welcome in, I’m Bob!

Zero528 is a website/blog dedicated to an eclectic collection of interests: running; cooking and baking recipes; music; sustainability; wildlife ecology; conservation, preservation, and restoration of nature.

As each new blog is added, it will appear in its respective category in chronological order.

My overall hope in sharing this website/blog is to inspire others to live fuller and healthier lifestyles.

All photos and images copyright 2020 R.L. Peterson except where noted.